Havoc at the Hall this week. The tiger cub (whose name I think is Baby) has destroyed the dog kennel and every soft toy Charles could find to keep him busy. Days now Charles has spent on his tablet, researching; how to live with a tiger, best tiger pens, feeding and claw cutting. Brigitte arrived a few days ago and they had a long serious chat before she trimmed the cub’s talons. Okay, I admit to you she is a vet and well, I made up the bit about her being a gold digger. She had to move away for a new job so she and Charles have to be apart. Sorry, sometimes I get carried away with a story and basically, I fib. I don’t mean any harm. I spend too much time with the Captain and his misogynist attitude can rub off…

Anyhow, the cub has come all the way from Thailand, from Charles and Sophia’s Great Uncle Rex, who went upstairs a while back. This was Rex’s inheritance to them, as everything else he owned was confiscated by all the people he owed money too. He led a darn good life Great Uncle Rex, or so I hear!

Over the last couple of days, Charles has been constructing a huge cage in the garden, taking up nearly all the lawn that William has carefully tended all his adult life. There may be arguments ahead. Charles, however, has had a new lease of life. His brown eyes are sparkling and he’s out in the fresh air. Normally he mixes potions in his workshop and barely notices the day. He’s a homopsych…NO! A homeopath, which sounds too like psychopath to me but Emily says he is a doctor and the potions aren’t poison but medicine. He’s like his Dad, William, who spends the whole day pottering, scribbling and creating in his madly cluttered laboratory. What a pair.

A time way back 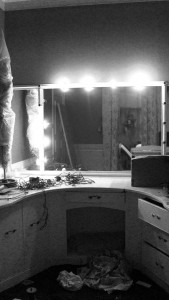 My Dad was a blacksmith in Ganton when I was downstairs, spending all his time in a forge. He was a bit of an inventor; he made my leg braces. Ah, this brings me to another tiny fib that you probably barely noticed but I feel I should own up to. In my early childhood we were very poor, which is why my mum had to leave and get work at the Hall. Food was very basic and milk expensive, especially when you have nothing and most days I was left inside, wrapped in a tight bundle whilst my parents worked. So my little legs grew a bit twisted and skinny and it was hard for me to move around. My Dad made me metal braces. Quite amazing they were; like the legs of a robot today but noisy and they did stick a little now and again. I had to grease them every day.

Being at the Hall helped me, as we got the leftovers from the Master’s meals; bits of fatty ham, vegetables (a real treat), old bread and delicious dripping. I f I had a mouth now, it would be watering.

A chimney is no place for a child

My braces were part of the reason I moved upstairs; they got stuck in the tight chimney space and I hung upside down for ever, until some thick embedded soot gave way and down I plummeted. I shouldn’t have been up the chimney but it was her, that nasty bundletail housekeeper, Mrs Baker. She said all the others were out so I had to go up the chimney. My mum begged her not to send me up but there was nothing she could do. The housekeeper was known to call servants to the kitchen and discipline them, using extremely hot metal spoons on flesh. Heart made of coal, that lass. I understood, my mum was powerless. Have you ever felt like that? Watching your world I am sure there are millions of you out there that have, in many different ways and for many different reasons almost every hour of every day.

One more thing before day breaks…

To be true, life wasn’t that much fun downstairs for me; dragging my feet about and feeling tired and hungry all the time. At least without my body I can move where I want and never need to eat or drink. In fact, at first it was wonderful but it just gets dull up here. 349 years of dull, more or less. It’s my own fault I’m still around but I will save those confessions for another time.
One more thing before day breaks… The black shape I mentioned before has appeared again. I don’t think any human is due to die, so maybe it’s here to watch and wait over a body downstairs; the cub, Baby, who amazingly enough, chases it around the slowly changing garden and growls as the form dances in front of him. Charlie will eat the cub surely in a couple of weeks ,so the black shape has come to pick him up. That’s all that makes sense to me and Emily.

I have been trying to take a picture of myself and one of Emily but as we don’t appear solid it’s a difficult job, I can tell you. That’s all for now folks!