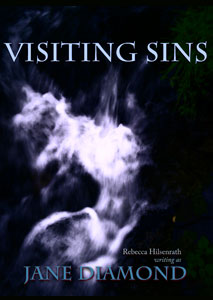 Buy the ebook
Writing Visiting Sins as Jane Diamond on the Mardiblog has been a phenomenal learning experience, because the framework of weekly posts has helped me to focus on writing manageable chunks of text on a regular basis, and the opportunity to have feedback on narrative still in draft has been very helpful. Even more than specific comments, I have valued enormously the camaraderie of readers and fellow writers and the encouragement I have received from friends, from family and from strangers.

Visiting Sins is not autobiographical, but it was written against the background of landscape and communities intensely familiar to me. I spent my childhood weekends and holidays in Ystradfellte, have been involved with more than one school reorganisation in Borehamwood; I have taken my children to feed the ducks in Aldenham Country Park and I have watched the celebrities from EastEnders walk down Shenley Road.

I am donating the royalties of Visiting Sins to LawWorks. There are many deserving causes and there are many different needs and challenges which face the community. Law, however, is the great enabler – access to advice and to justice is what enables individuals to address poverty, discrimination, homelessness and abuse. Thank you so much for your help.

‘You called him Dad?’ I said, stupidly.
‘What else were we supposed to call him?’ she asked, crisply, and I wondered if she noticed the plural, whether she realised she was slipping back into Susannah’s world. ‘We never knew what the stones were for. My parents never talked about them. Susannah asked them and they wouldn’t tell her.’
‘Did he not like cats?’ I asked, knowing it was a stupid thing to say, but desperate to hold on to the conversation, to draw her back in, to make the most, before it closed, of this extraordinary and unexpected window into the past.
‘My father?’ Rachel gave a short laugh. I found myself hoping that when she and Susannah had played dolls on the stones at our feet that the giggles had been happier, less forced. There was nothing amused about my mother’s face, just then. ‘He didn’t like anyone or anything. He was the most severe, cold, unfriendly, critical man. He sucked happiness out of any situation. He didn’t like other people having a good time, it was as simple as that.’
I looked at my own father, stricken. I had brought this on us, by my treasure hunt, by bringing Rachel here today, by asking her Did he not like cats? – a question I privately promised myself never to ask anyone ever again. My father shook his head slightly, a gesture I knew to mean all at once that Mum would be all right, that I shouldn’t blame myself and that I should stop asking questions. He put his arm around Rachel and his wife leaned into him. She said, to his jacket
‘I’m sorry. I don’t think, really, I feel like going inside today, do you mind?’
Well, no – clearly. But I had the answer to one of my most pressing questions. I couldn’t wait to tell Jason. No question of the neighbours breaking in to bury Old Blackie; no question of the stones being nothing to do with Martin and Vanessa. Susannah asked them and they wouldn’t tell her. They had known and they were keeping it to themselves.

Buy the ebook
Abby comes from a close and loving traditional Jewish home but married into a family that celebrates Christmas.  When the marriage ends, she moves to the country with her son Jacob to heal in a place where she can begin to rebuild her self-belief and her belief in other things and other people – and where she can protect Jacob from making the same mistakes.

When a local girl goes missing, Abby’s refuge fails to protect her against an unravelling both of Jacob’s childhood and her own.  Against a backdrop of conflict in the Middle East and America, Abby goes on a journey across the generations, which will lead her to lost friends and family and new beliefs and traditions.  She will learn about personal and community tradition and whether it is really possible to love across the divide.

In turns lyrical and poignant, with a core of self-deprecating humour, Jane Diamond has created a story for us in our children’s generation.  Multi-layered and spanning time and place, personal and public tragedy, this rites of passage story is simultaneously quintessentially English and multi-ethnic and is centred on the most complex and ubiquitous human problem of all time; relationships.

Jane Diamond lives in London and multi-tasks. This is her first novel published by Mardibooks.