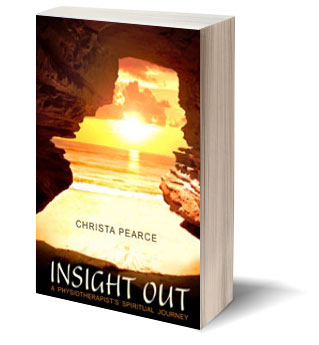 Christa Pearce’s book, Insight Out, is the story of her work as a spiritual healer in West London and details the startling encounters with people whose lives had taken them to the brink of desperation, until they made contact with her. The subject matter ranges from regression to out of body experiences, and links the physical with the spiritual in a way that is both enlightening and unexpected. Once you have read Christa Pearce’s book, your outlook on life will change. The events recounted in this story of extraordinary moments in ordinary lives will both surprise and entertain.

Doris, a friend of a friend, was very interested to volunteer for past life regression. She was a friendly and placid housewife. Her pride and joy was her two year old son.
Doris explained before the hypnotic session that she wore glasses as well as contact lenses for protection. “Why for protection?” I asked. Then she told me her story.
“When I was about five years old or even younger, my mother told me this and I partly remember it. I was very frightened of people in wheelchairs, people walking on crutches or people who were just ill. If they then also had black hair, I would scream and my Mum had to cross the road immediately, to calm me down. We had no idea why this happened or what it was connected with.
“When I was nine years old, I fell badly and hit my head on a wooden board. The board had a prominent nail, which pierced my left eye. Since then I have been nearly blind there. That’s why I am so paranoid about eye protection.”
At the start of the hypnosis I suggested Doris might take off her glasses.
It seemed obvious and natural to do that, as she had to close her eyes anyway. She reacted strongly, becoming petrified, and insisted that the glasses had to stay on. I agreed.
After performing the usual induction, then using the routine of counting backwards in years, I asked her to go directly through the tunnel. At the exit of the tunnel was, as always, a beautiful white light, representing her past life.
“Where are you?” I enquired.
Doris told me that she was in a forest. Her parents had a little cottage there and her father worked as a woodcutter locally.
“How old are you?” I enquired.
“Five.”
“What are you doing?”
“I am worried.”
“Why?”
“I can see my sister”
“What does your sister look like? Can you describe her?”
“She has got black hair.”
“How old is she?”
“Three.”
“She is lying in a wooden box.”
She continued, “I am not allowed in that room. The door is shut, but I can see through a little gap what’s inside the room.”
“What else do you see?”
“My dad is looking at my sister. Now he is putting a lid on the box and hammering nails into the lid to keep it shut.” I wanted to scream, “Don’t do that! She will die!”
“But I could not get a word out, I was so scared. I was not supposed to see that.”
“What happened then?”
“I ran away into the woods. I ran and ran . . .
“When I returned I knew I must not tell anybody about this. I was not supposed to go anywhere near that room. I would get punished.”
I was curious: Doris’s phobia about her eyes‚ I wanted to know.
“What has the story about your sister and the wooden box to do with your eyesight?”
She replied, “Nail in the coffin, nail in the eye!”
I did not quite understand. Did she really believe her eyes, especially her left eye with which she’d managed to see through the crack in the door, were guilty of seeing something terrifying? And if she had managed to intervene, did she think she would have been able to save her sister, who was obviously being prepared for her funeral?
It is almost unbelievable. Do we in some unconscious way blame our body parts for our mistakes and punish them?
The next story also seemed to confirm that.

–From “Insight Out” by Christa Pearce