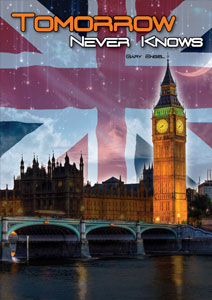 Buy the ebook
The year 2024, where all elements of life are played out on the social media giant Ou-Topos, the world in some corners is a marked, unrecognizable place. Where continents rise and states fall, the influx Westminster struggles to keep pace. As always in the corridors of power – even with good men – rivalries persist, alliances are forgotten and warnings discarded. While it isn’t long before England as a result is sleepwalking toward disaster.

When a National Strike turns into a riot, power is snatched by the Far-Left leader Mulhorn, the savage embodiment of his Real Socialist party. With full police and media domination, Mulhorn’s totalitarian rule begins by labelling his enemies “treasonous”, while officially declaring himself Protectorate Master. Under his Government life descends into a harsh, unfair and perilous version of reality for its frightened English citizens. Although, with critics disappearing under the darkened vail of police raid, there is nothing left to concern the most powerful man in the land.

Finally, that all changes when a terrible crime brings memories flooding back to the troubled former Chancellor, Dickie Bird. Pulled round from his own tragic loss, he decides to bury the hatchet with Thomas Wilde, the one man he believes could help construct an opposition to challenge Mulhorn. When a shock revelation dashes that, he brings Wilde’s daughter, Tamara aboard as the driving force behind the new party. But in the perilous era known as Reality, could it all still rest on watching the backs of her closest allies?

As Ian Fleming’s wife, Anne, said of his first novel, this may not be the kind of book to dedicate to someone.

Yet, I hope those remembered are happy nonetheless.

To those who in the past meant so much and are no longer here to guide.
—JH.

To those who drive us on no matter what, in everyday and everything attempted to date.
—DH.

And for those who I’ve only known a short time, but have inspired so much already.
—SLG.

And thanks to Brennan Graphics too for their work on the cover.

“Today, under the Real Socialists, the only people who need fear anything – are the innocent!”

Stand Up Beside the Fireplace 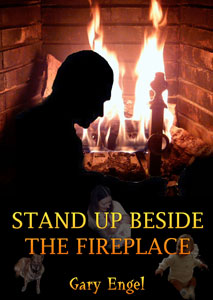 Buy the ebook
Is a story of the building of a better life for a young family seeking freedom and control over their circumstances. Not a lot to ask, when the wife has seemingly everything it takes to thrive in business. What could possibly go wrong? Well, after their second child is born with serious heart problems, the family’s whole world falls around them and their lives are for ever changed.EXTRACT:

A gradual mental decline in Dave continued. He was no longer driving, which made getting anywhere a little more difficult when used to a car. But he could not half make things harder for himself than they needed to be. As demonstrated in his new found conflict with the modern world, that he was so out of touch with. Standing over an hour for a bus before returning home complaining, ‘None of the b****y buses would stop for me.’
Susannah queried, ‘Well, you did put your hand out, didn’t you?’ Dave scowled at her, ‘Why would I do that? I never had to before.’ She knew to make light of his problems, it was the best way to handle him. ‘That’ll be why they didn’t stop. Are you going back out to try again?’ Clearly not in the mood, now on the sofa he glanced over to her, ‘No, to hell with them. I’ll go tomorrow.’
Steve’s relatively unused Raleigh Grifter bicycle would finally come in handy, as Dave made an effort to save on bus fares for his next visit to the unemployment office. It wasn’t his best idea, the out of shape thirty-five year old hadn’t exercised properly in years. The Grifter was heavy, with a crossbar which resembled the thickness of a piece of scaffolding, only probably not as lightweight. Dave set off in an all or nothing dash which quickly slowed to pedestrian pace. Behind him formed an impatient line of traffic which drew a curious Susannah outside due to all the car horns directed at him. It was the first time she had ever known a traffic jam to form in Dylan’s Road. With Dave furiously peddling, his ill-positioning wasn’t allowing anything to overtake him.
As the time he had been away ticked on, Susannah grew a little concerned. He’d been out over three hours. Keeping a watchful eye, she spotted him freewheeling back down the road a little redder in the face than when he’d left. As he approached the driveway he lifted one leg and allowed the bike to roll from beneath him. The heavy bike collapsed to the ground, as Dave also looked close to doing. ‘Did you enjoy that?’ Susannah asked. As he walked in the front door, legs arched and bowed. ‘Does it look as though I enjoyed it? Nah, I feel like I’ve been riding a bloody great stallion if you must know.’ It was a good thing it had been his suggestion to ride Steve’s bike, but Dave certainly didn’t plan to make a repeat of the hideous spectacle.