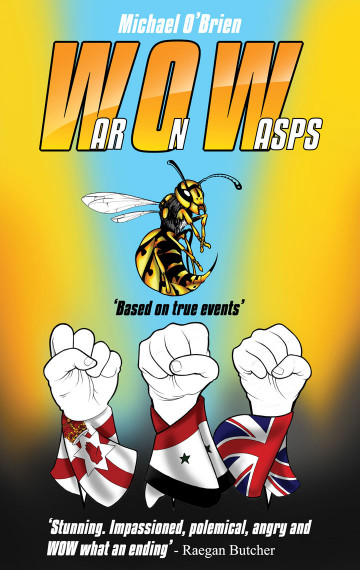 A novel based on recent true events spanning Northern Ireland, London and the Middle–East, ‘War on Wasps’ is a novel of love and loss, of fear and faith, of treachery and terrorism and why well-intentioned people do terrible things. It is the story of Suzy Regan who flees from Belfast after her brother Joey is ‘disappeared’ by the ‘real’ IRA and her father is killed in the Omagh bombing, to seek a new life in London. Lonely and working as a chambermaid in the Hilton hotel she meets and is attracted to sophisticated and mysterious Hassam Mosani, a Jordanian Muslim journalist who seduces her. Pregnant and responding to his offer of marriage, she attempts to board a plane to Jerusalem. Unbeknown to her he has planted a bomb in her bag which he plans to detonate over central London. DCI Tom Tredwell, a traumatised veteran investigator of the London transport bombings (7/7), who has been diagnosed with terminal cancer, is called in due to his experience in dealing with Muslim instigated terrorist threats. Working in the shadow of his own mortality, he identifies Mosani as a terrorist bomber. In a race against the clock, Tom attempts to prevent the atrocity and rescue Suzy in the limited time he personally has left. Based on real events this tense, compelling and intelligent thriller offers a serious exploration and moral analysis of the motivation for and operation of terrorism in the West. A necessary and chilling warning for our times.
Extract
“I wanted to see through your eyes, find the truth. I want peace.”

“We all want that…the people of this country seem to live in a constant state of fear.”

“Can you blame them? You guys are blowing them up! Why are you doing that? If being here is such an inhuman, unjust torture why do you stay? You must know that these outrages will achieve nothing except more hostility, greater intolerance, less secure lives.”

“There are always extremists, always criminals, within any population of people. The ones who take illegal action are a tiny, an infinitesimal fraction of the law abiding community. They’re usually those who most acutely see themselves as the victims you talk of.”

“Patriotism is when love of your own people comes first; nationalism, when hate for people other than your own comes first. So what drives you love or hate?” The muezzin smiled enigmatically. He continued:
“Bees and wasps have caused as many deaths in the UK as terrorism in the past decade. Has the Uk government launched a ‘war’ on wasps?”