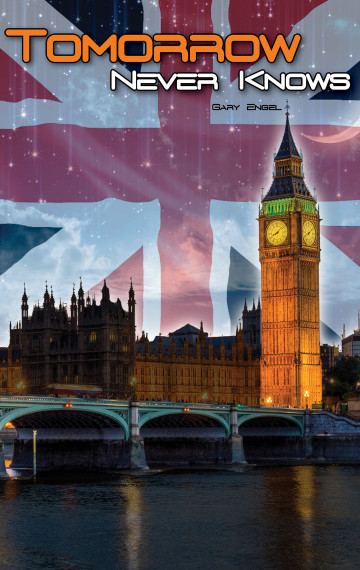 The year 2024, where all elements of life are played out on the social media giant Ou-Topos, the world in some corners is a marked, unrecognizable place. Where continents rise and states fall, the influx Westminster struggles to keep pace. As always in the corridors of power – even with good men – rivalries persist, alliances are forgotten and warnings discarded. While it isn’t long before England as a result is sleepwalking toward disaster.
When a National Strike turns into a riot, power is snatched by the Far-Left leader Mulhorn, the savage embodiment of his Real Socialist party. With full police and media domination, Mulhorn’s totalitarian rule begins by labelling his enemies “treasonous”, while officially declaring himself Protectorate Master. Under his Government life descends into a harsh, unfair and perilous version of reality for its frightened English citizens. Although, with critics disappearing under the darkened vail of police raid, there is nothing left to concern the most powerful man in the land.

Finally, that all changes when a terrible crime brings memories flooding back to the troubled former Chancellor, Dickie Bird. Pulled round from his own tragic loss, he decides to bury the hatchet with Thomas Wilde, the one man he believes could help construct an opposition to challenge Mulhorn. When a shock revelation dashes that, he brings Wilde’s daughter, Tamara aboard as the driving force behind the new party. But in the perilous era known as Reality, could it all still rest on watching the backs of her closest allies?

As Ian Fleming’s wife, Anne, said of his first novel, this may not be the kind of book to dedicate to someone.

Yet, I hope those remembered are happy nonetheless.

To those who in the past meant so much and are no longer here to guide.
—JH.

To those who drive us on no matter what, in everyday and everything attempted to date.
—DH.

And for those who I’ve only known a short time, but have inspired so much already.
—SLG.

And thanks to Brennan Graphics too for their work on the cover.

“Today, under the Real Socialists, the only people who need fear anything – are the innocent!”