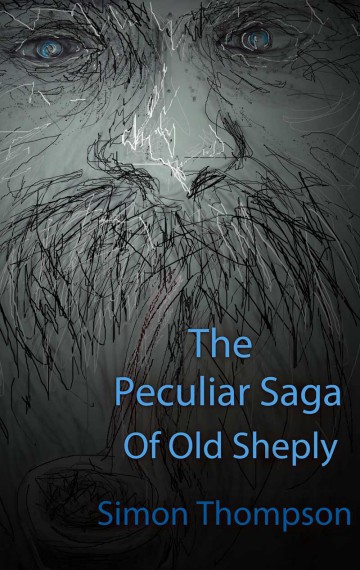 What do you get when you throw together a thousand year old man, a dying nonagenarian media mogul, a young newspaper reporter haunted by a tragic past and a psychotic Indonesian hit-woman?
You get The Peculiar Saga of Old Sheply… and it’s only going to get stranger.

By the year 2066, most of the northern hemisphere lays underwater. A sudden and cataclysmic flood has turned the world and all its certainties on its head. Britain has become little more than a Third World country crudely held together with blue-tack, string and lollipop sticks.
It is against this backdrop that an elderly man in the city of Nottingham wanders into the offices of his local newspaper with a story to tell – a story that stretches back over a thousand years.
At the same time a nonagenarian media tycoon, facing the end of his life and the loss of all he has worked for, decides that he quite likes the idea of living forever and so puts in place a plan designed to facilitate his own immortality.
Soon he, the old man, and the reporter dispatched to cover his story are thrown together in a battle for the secret to eternal life.
What follows is a darkly comic story that moves between the distant past and the not too distant future. It is the story of one man and one city’s life over the last millennia taking in the Norman Conquest, the story of Robin Hood, The Black Death, The English Civil War, The Industrial Revolution, Britain’s first black entrepreneur, the world bare knuckle boxing champion, the most valuable manuscript in history and an Indonesian hit-woman with a penchant for sticking jelly babies up her victim’s noses.
Oh… and the worst case of haemorrhoids ever known.