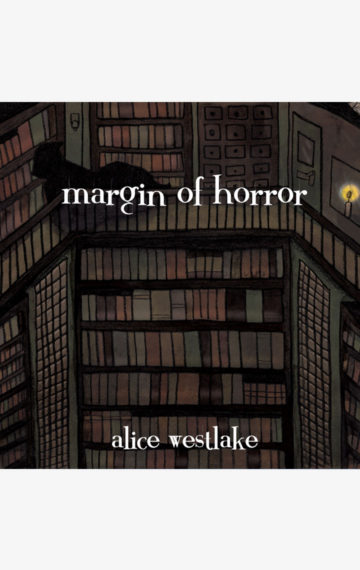 ‘Out in December, Margin of Horror tells the story of a missing girl… a forbidden library… and a school with a very dark secret,’ Esther read slowly. ‘Four plucky children pit their wits against the dark forces that would keep the truth hidden-’ she looked up at the three eager faces gazing at her around the table, and a collective shiver went through them all. ‘But can they solve the mystery and live to tell the tale?’

King Edward V Secondary School has a haunted library – or so everybody says. The gloomy, octagonal room with its shelves of dusty books and its out-of-bounds gallery is believed to be haunted by the ghost of schoolgirl Julia Mathers, who went missing years ago. Is it Julia leaving the sinister riddles in the margins of books? Martin and Esther don’t think so. They are sure the culprit is alive and well and up to no good, and they’re determined to get to the bottom of it.

But with books behaving more and more strangely, ghosts are not the only supernatural phenomena the children have to watch out for. The story folds in on itself again and again in a giddying series of twists, and Esther and Martin are in danger of being trapped inside forever.

But books can’t hurt you…. can they?

Our heroes are about to find out.