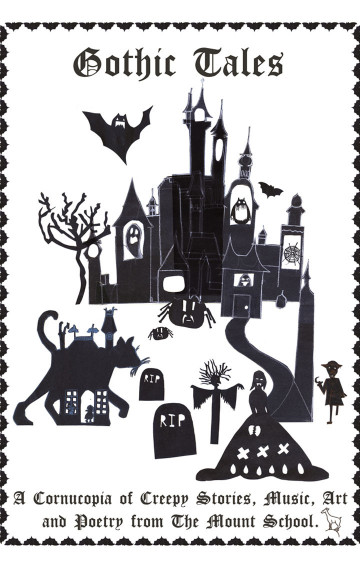 When we think of the Gothic of course many traditional images from literature spring to mind – not least vampires and castles, cobbles and wind-swept moors. But the Gothic embraces so much more than the Romantic and Victorian period. To younger generations it conjures a modern cult in music and dress, and film; to Historians the ancient Goths were a whole sub-culture inhabiting the Crimea and Germanic regions; whilst Medieval Europe fashioned Art and Architecture in its designation of the Gothic style. The universality of Gothic has meant that it has seen revivals and re-birth across time and space and has again been interpreted here in its widest form to cover the supernatural, mythical, historical and factual and resonates with qualities of hidden perspectives, of secrecy and dark, moody depths.

‘Gothic Tales’ has become a feast of extraordinary creativity demonstrating some wonderful research, craftsmanship, individuality and energy in the stories, poems, art and design contained in its pages. The essence of ‘The Mount’ is yet again demonstrated in the unique qualities that our girls bring to this community and the nurturing of their skills and celebration of their achievements under our roof is a matter of great pride to us.