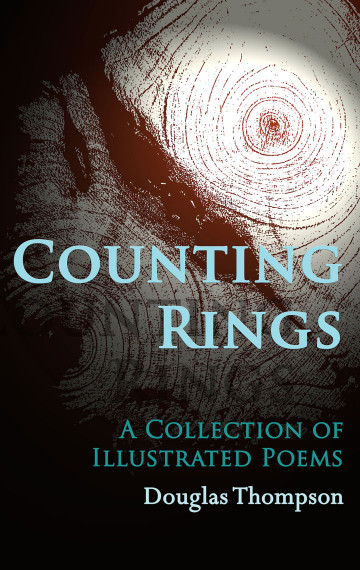 This collection of poems arises from observations of the world around me and things that get into my head, then, rattle around until they form into poems.

I have a preference for rhyming poetry, for no particular reason. My hope is that they give the reader something to think about, and sometimes, something to smile about.

The mighty elm was a tree at the end of our orchard. It was huge with three trunks, and was home to tawny owls among many other things. My poem of the same name is an elegy for all the elms that died in the 1970s and 80s.

‘The Last Flower’ is meant to be a statement about extinctions, and the effects of the extinction of one species on the whole ecosystem.

‘The Holy Well’ refers to the legendary story of St Winefride and the well which gives our town its name.

‘Counting Rings’ is self-evidently about coming across a favourite old tree that had been cut down.

‘How to Make a Teddy’ was written for my youngest daughter when she was young.

‘A Journey Together’ was part of my father-of-the-bride speech for my daughter’s wedding.

‘Competing with Katie’ is a bit of fun. I hope it makes people smile.

In this collection, I have aimed to include sadness, happiness, food for thought, and fun – A Counting of Rings.

The winter without any snow
We got out the sledge in November, and painted it all red and green.
We polished the runners, and padded the seat, then put it back shiny and clean.
Then it stayed in the shed through November, awaiting the onset of snow.
But the snow never came in November, not even a flake came to blow.
The children were racked with impatience, they jumped out of bed every day.
Then ran to the window to look for the snow, but each morning brought them dismay.
December bought presents and tinsel, and glittering snow on a card.
But snow on the ground, was yet to be found, and we never saw snow in the yard.
The new year followed the old one around, but it kept the old weather, I fear.
As January often, brings winter, but it came on it’s own, in that year.
And the box by the door held a hat and a scarf, and a carrot, and pieces of coal.
And the name of a snowman, in crayon, it’s the nearest he’d have to a soul.
Now February often comes forth, from under a blanket of snow.
But, sometimes, it floats to the surface, and that year, it came with the flow.
So the children drew pictures of snowmen, as the sky sent us ever more rain.
And ghosts of the snowmen, who never saw life, were flowing away, down the drain.
Now the hopes of a snowstorm were fading, as March painted green, on the lanes.
And we wondered if springtime was coming, to bring us an end to the rains.
So the pony next door, got a carrot, and he twitched back his ears with delight.
The box and the sledge, were sharing the shed, and the children were making a kite.