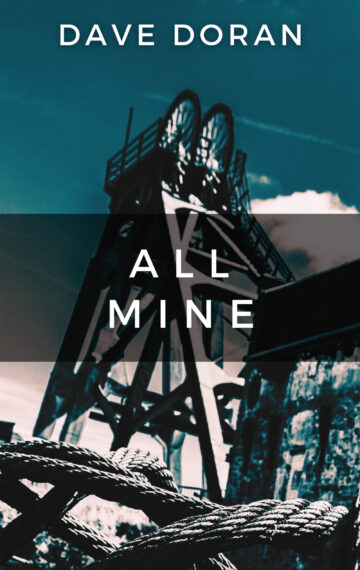 Coal is ingrained deep in Dave Doran’s DNA. Mining is a family matter, his grandfather, great-grandfather and a great-uncle, who was killed in a pit disaster at the age of 18, were miners all their working lives. A childhood spent in the shadow of the local pit wheel, and being brought up in a close-knit mining community, provided him with lifelong values.
All Mine is part memoir, part natural history, part social commentary, told through the medium of poetry: a collection of writing from boyhood to retirement. The poems take us on a journey from the coal fields of West Cumbria, through the complex underbelly of a Metropolis, to the bucolic landscapes of Buckinghamshire. All Mine has been a lifetime in the making, a series of flirtations with writing, art, and a thirty-year career policing the streets of London.
The poetic gaze moves from the Irish Sea to the River Thames, the miner’s strike of 1984 to the pandemic, and a view of the capital through the eyes of a street copper; each poem questions again the things that make a man.
There are many events which shape and fracture an identity. The writing contained in this collection reflects a life of love, loss, bewilderment and belonging. Coal haunts the bones. Ghosts darken walls of black stone, catch upon a common air, shadowing and highlighting those things that lift a life from the pit to the surface. History and chance layer each other like geological eras in this debut collection.

Who knows what life will bring when you enter the world in a cupboard. This is where Dave’s story begins. It’s 1962 and the delivery rooms at Whitehaven Hospital are full. A store cupboard has been cleared and turned into an emergency delivery bed and that is where he appeared and stayed for ten days. All going to explain his affiliation for airing cupboards and other enclosed spaces.
As a child, under the bed clothes became his safe space, a place to read by torchlight, a place to develop a lifelong love for words and stories. He was given his first poetry book in 1972 (he still has it) which prompted him to write his first poem, which was published in a collective school anthology.
There has been a gap of nearly fifty years before his second piece made publication. In between, Dave has driven an oil tanker in the Gulf of Mexico, done some obligatory loafing as a student, then spent thirty-years working in various guises as a police officer in London: riot officer, surveillance officer, detective, community officer, and a stint in leadership and training. All of which have given him an expansive array of experiences to write about.
In 2018 he decided to take full advantage of early retirement and follow a lifelong ambition to get his words and thoughts into print. His first poetry collection, All Mine, is due to be published shortly and he is nearing completion of the first draft of his first novel, set around a mining community in the 1970’s and the Miner’s strike in 1984. Several of his poems have appeared in various poetry anthologies and on a number of poetry websites.
When Dave is not glued to his writing desk you will find him stood at his easel or down at his local gym doing crossfit, boxercise, and any other cise on the gym menu. Dave lives in Haddenham with his wife. Their daughter is busy sending people into space. You can find more about Dave on Instagram at @davydwriter or his website www.davydwriter.com