You are here: Home / Archives for Sue Benwell

Sue Benwell’s passion for writing started at school. In 1999, Sue won the Freelance Journalist of the Year competition in Writers’ News magazine. She has had several articles and poems published, as well as ghosting two non-fiction books. ‘A Twitch in Time’, the autobiography of the late Carry-On star, Jack Douglas, was launched at Pinewood Studios, and, ‘Pitkin’s P.A. My Life with Sir Norman Wisdom’, was written on behalf of Sir Norman’s ex-Personal Assistant, Ann Axe. These were two lovely projects and Sue felt extremely proud to be involved with them both, saying it was more a labour of love, as she had always been a great fan of these comedy icons.

Sue’s book, Stream of Thoughts, contains some of her poetry and she was flattered when Rhys Madoc, son of the late actor, Philip Madoc, asked to include her poem, Philip’s Funeral, in the Order of Service booklet for his father’s memorial at St Paul’s, Covent Garden. So inspired that day by the London Welsh male-voice choir, Sue dedicated a poem to them. The poem, entitled Striking a Chord, subsequently appeared in one of the choir’s concert programmes.

Sue was editor of Endeavour, the Inspector Morse Society’s newsletter, and has been a Volunteer Garden Guide for the National Trust at Waddesdon Manor for the past six years.

Sue’s original inspiration for writing Gold Digger came from interviewing a Welsh-gold prospector in Snowdonia, although, once she’d started writing, says the story quickly took off in an entirely different and unexpected direction. 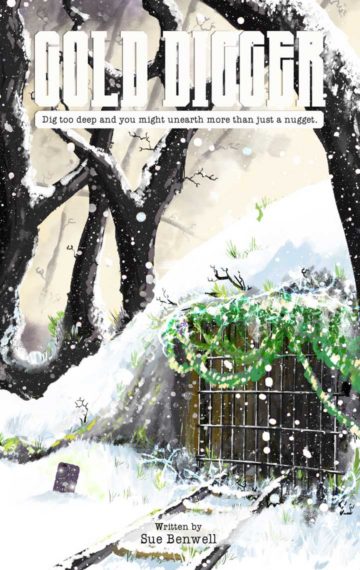